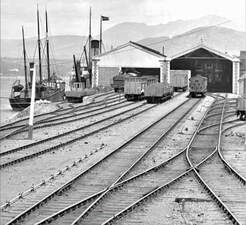 ​Greenore Golf Club was built by the London & North Western Railway Company which at this time co-owned the railway and the hotel. The golf course was first opened with 12 holes in October 1896 and the following year was extended to 18 holes. Its purpose was for recreation for the hotel guests and to generate passenger travel on the railway for people to play golf from both Dundalk and Newry.

The original idea came from a Mr. George L. Bailie from Musselburgh in Scotland. Travelling to Greenore by train, he thought the company’s land beside the railway would make an excellent golf course. It seems Mr. Bailie made a profession of constructing golf courses and may have been on a retainer for some of the old rail companies.

The original Clubhouse had no facilities for ladies, so in 1898 a small room was added to one end of the clubhouse for the ladies.

In 1900 Greenore was one of the 10 clubs in Ireland deemed suitable for G.U.I interclub competition, the others being Athlone, Lahinch, Royal Portrush, Royal Co. Down, North West, Royal Dublin, Portmarnock, Co. Louth and Foxrock. 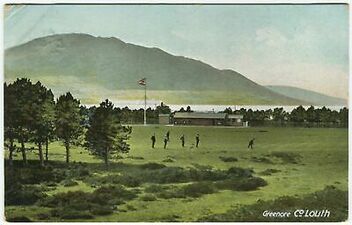 In 1902 the Railway Company organised a Pro Tournament with top pro golfers from England, Scotland, Wales and Ireland invited. Amongst those playing were Harry Vardon, James Braid, J.H. Taylor, J. Herd & J White who between them had won 18 British Open Titles. Braid was the eventual winner of the competition.

In 1954, the members bought the course at public auction in Dublin when the railway company was pulling out of Ireland, paying £2,000 for 120 acres.

​In 1973, Eddie Hackett, course architect, was called in to upgrade and improve the course. Later in 1984, when the club bought some 14 acres of the land at the end of the course, Eddie Hackett was again called upon to design new holes and resize some of the old ones.

Peter, Jimmy and Pat were three golfing brothers born in 4 Anglesey Terrace, Greenore. All three had a natural gift for playing golf and they learned their trade and honed their skills on the lovely links of Greenore.
Peter, the eldest was born in 1886 and considered good enough at the tender age of 17 to be appointed Professional at our fledgling club in 1903. A position he held until 1907, when he moved to Monkstown in Cork harbour, where he laid out a 9 hole golf course on Lord De Vesci’s demense.
In 1915 he sailed on the Cymric from Liverpool to the United States of America, where he would establish a very successful career as a Club Professional Golfer. In America for some unknown reason he became known as O’Hara.
His first position as teaching professional was in the Pittsburgh Field Golf Club in 1915, where he remained until 1918. In 1918 he moved from Pittsburgh to New Jersey, joining up with Haworth G. and C.C. Bergen County, New Jersey (now called White Beeches G and C C).
In an exhibition match in Shackamaxon Golf and Country Club in Scotch Plain, New Jersey, towards the end of 1918, he so impressed the club President that he was offered the position of Club professional to replace Cyril Walker, who was moving to Golden Valley Golf Club in Minneapolis. Peter took up his new appointment in Shackamaxon on March 1st 1919 and remained there until 1922.
Newspaper reports in the years from 1922 to 1928 show Peter being unattached for a short while, and then attached to a number of clubs in Pittsburgh (Westmoreland, Haworth G & C.Cs) and in Bretton Woods, New Hampshire, before he settled down to his long time association with Westmoreland Golf and Country Club, (now called Green Oaks G and CC) Rosedale, Pittsburgh in 1928, where he had a happy and successful relationship until his retirement in 1948.
On his retirement Peter and his wife Hanora (Nora) moved to the sunny south and settled in Broward County in Florida, where he enjoyed a long life until he passed away on April 11th 1977 at the fine old age of 91. Nora died some months later on November 17th, that same year. They are both interred in St. Joseph’s Cemetery, in Hackensack, New Jersey.
Among Peter’s many successes in America was winning the inaugural New Jersey open in 1922, joint winner with George Bowden in the 1922 Houston open and claiming the Western Pennsylvania Golf Association open Championship in 1931. At the age of 48 he won the Bedford open in 1934 beating Sam Parkes Jnr. by one shot. Parkes would go on to win the 1935 U.S. Open.
For almost 80 years he held the highest finish for an Irish professional golfer in the United States open finishing a credible T7th in the 1929 event.
Pat, the youngest was born in 1891 and his first professional appointment was in Greenore in 1910. He also spent some time as professional at Foxrock from 1912 to 1914/15. In 1914 he tied second with his brother Jimmy in the Irish Professional Championship. Also in 1914 he was the winner of an IPGA competition held in Dollymount. He was professional in Dundalk golf club in 1919, when he won the Irish Professional Championship.
The lure of the United States of America finally tempted Pat to head west and in 1920, he boarded the steamship “New York” in Southampton and sailed to join his brother Peter in Shackamaxon G and CC. Like his brother Peter he was known as “O’Hara” in America.
Early in 1921 he moved to the Richmond County G and CC and remained there until the end of 1922 when for some unknown reason he returned to Ireland.
Pat won the Palm Beach open in 1921 and had some high finishes in other opens in 1921 and 1922, but his big win came in the 1922 North and South Open in Pinehurst where his brilliant second round score 69, was discarded when the tournament organisers cancelled the second round because of severe rainfall flooding a number of greens and fairways, reducing the open to 54 holes. Pat now found himself trailing by three strokes, but he went out the next day and after playing 36 holes of superb golf he led the field, easily winning by 4 strokes.
Pat won the Irish Professional Championship again in 1927. He enjoyed life in Greenore giving lessons and the odd bit of socialising. He died on December 22nd 1946 at the relatively young age of 55 and is buried in St. Patrick’s Cemetery, Dowdallshill, Dundalk.
Jimmy was born in 1890 and was professional in Greenore in 1907/08, 1911/12 and 1924/26. He was also Professional in Skerries from 1914 to 1921. In 1914 he finished joint second with his brother Pat in the Irish Professional Championship in Royal Co. Down, and in 1920 he captured the title in Castleknock.
Jimmy did not have the wanderlust of his brothers and was content to see out his time helping the members of Greenore Golf Club, right up to his demise on 25th February 1963 at the age of 73. He is buried with Pat in St. Patrick’s Cemetery. 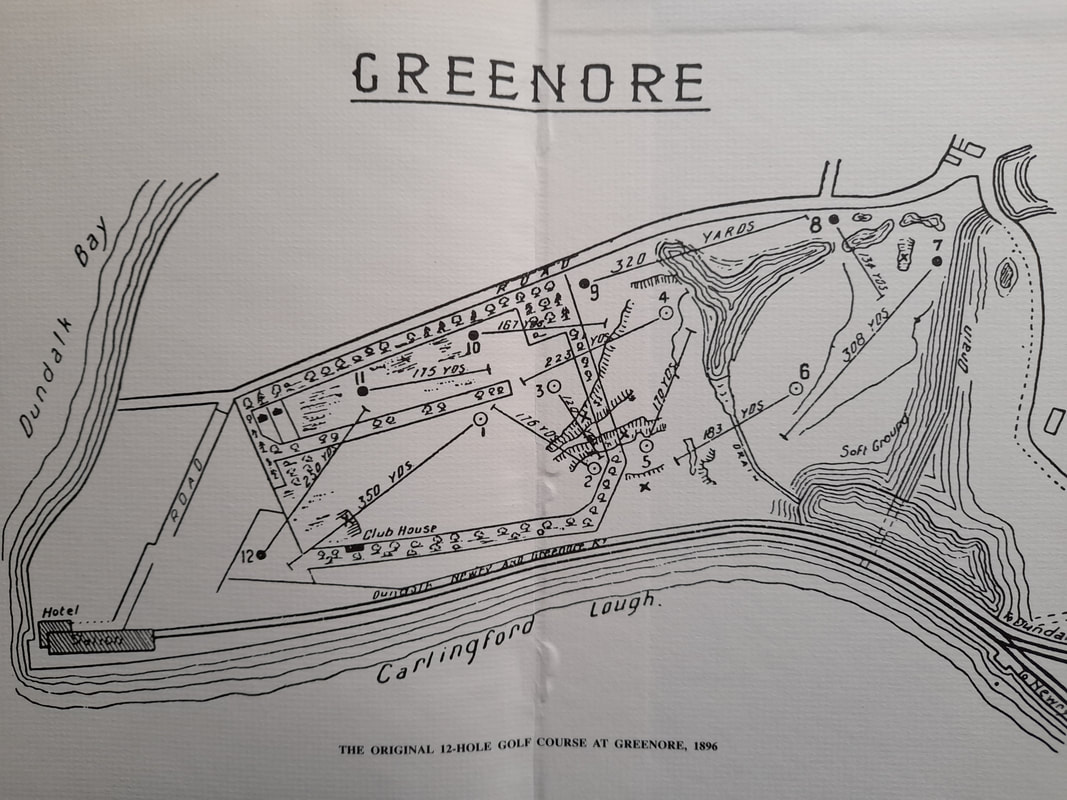 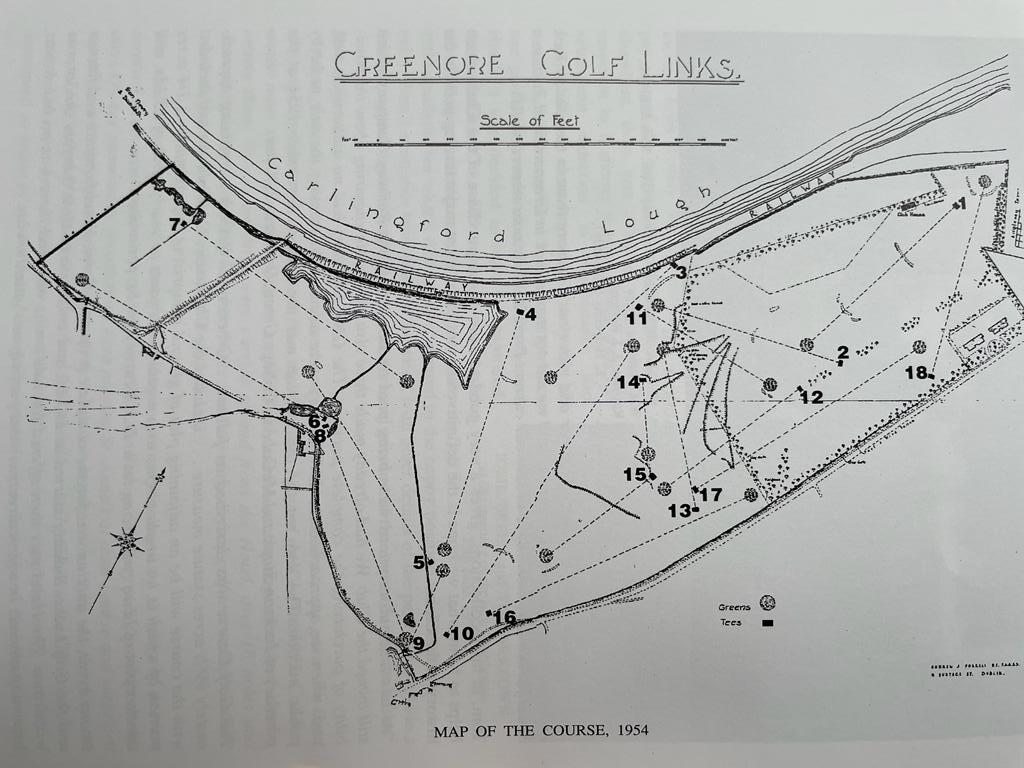 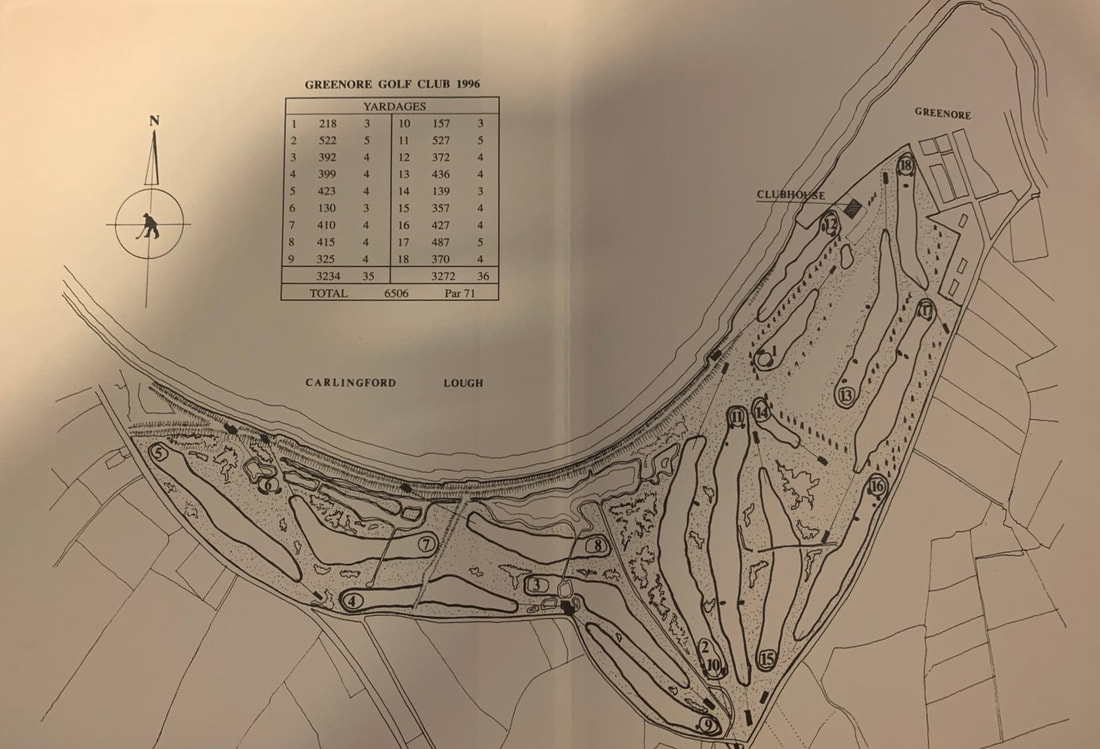